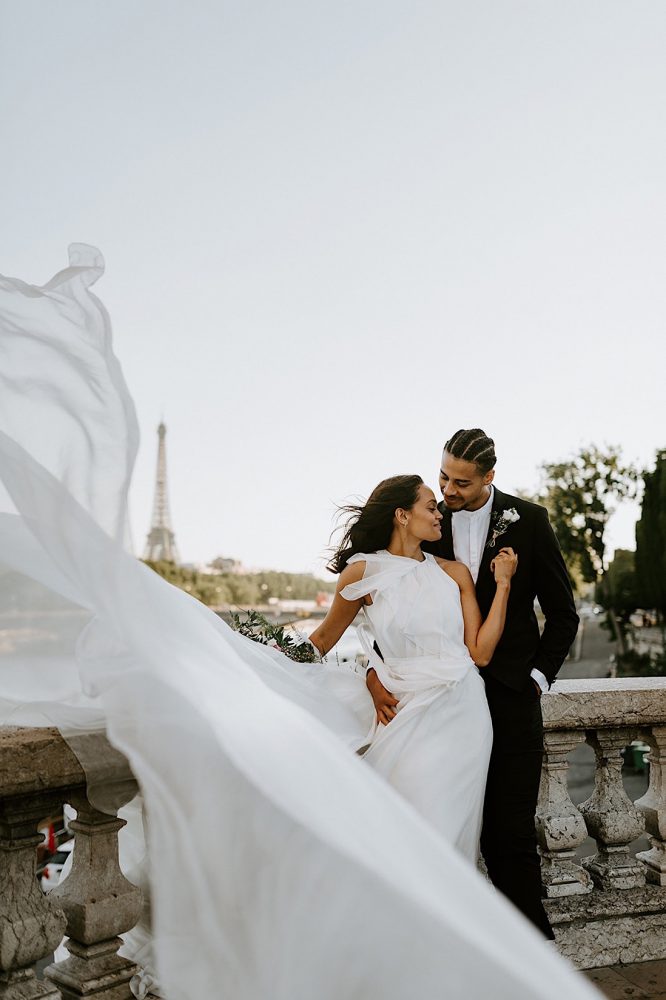 After a year and a half of being in the US, last summer I was able to return to France. On my trip, I decided to make the most of it by planning a styled shoot. Coincidentally Shalize and Gaylor’s wedding anniversary was only a few days later and what began as a Parisian style wedding editorial slowly evolved into an intimate anniversary session in Paris – in the city of love.

Although Paris is not where I’m from originally, there is no other city like it. As a child, I traveled often to Paris for many reasons, but primarily for family. I’m extremely familiar with the city and know many cute destinations, restaurants and where to hang out. Because of this, it was so easy to plan my shoot with Shalize and Gaylor. Two days before, I scouted locations and honestly because Paris is so beautiful its impossible to not want to do it all! From the Eiffel Tower to the Louvre and passing by “Les Quais de Seine”, everywhere you look you cannot help but fall in love.

This shoot special to me because I had finally returned to France, but also because my mother played a large role in collaboration. My mother is a florist. Together, with her friend, they created two lush garden-inspired bouquets that brought our vision to life. Not only did she ensure the flowers remained fresh on this hot summer day, but she also helped us carry all of our photography gear! She is nothing short of amazing and I can’t thank her enough for joining me on this experience.

My aunt lives in a traditional Parisian building built of white stone, with a tall metal door and a prewar elevator with sliding doors. We started our session near her beautiful staircase with mirrors and walked down the streets of the neighborhood to a beautiful Cafe and Bar called “The Belloy”. As we sat, we people watched and celebrated with Champagne before heading to our next location – the famous Pont Alexandre III. It is one of the most characteristic bridges of Paris and French architecture, what more can you ask for?

Our last location was the Louvre. The museum is located in the city center of Paris and has so much to offer within walking distance. Its where modernity meets history with the sleek architecture of the Pyramid near the Jardin des Tuileries.

As the sun set on our beautiful summer day, the reflection of light set a different ambiance. The cityscape began to slow and as the Eiffel tower lit, it gave us a show. Paris is nicknamed “La Ville Lumiere” and to anyone reading this, I highly recommend you visit Paris at night. It’s where the magic happens.

Check out my previous wedding bridal session in France here!

Loving these Parisian Wedding Photos? Send me a message and let's start planning your perfect wedding day in the most romantic city in the World.